PUBLIC LANDS FOR THE PEOPLE
EST. 1990 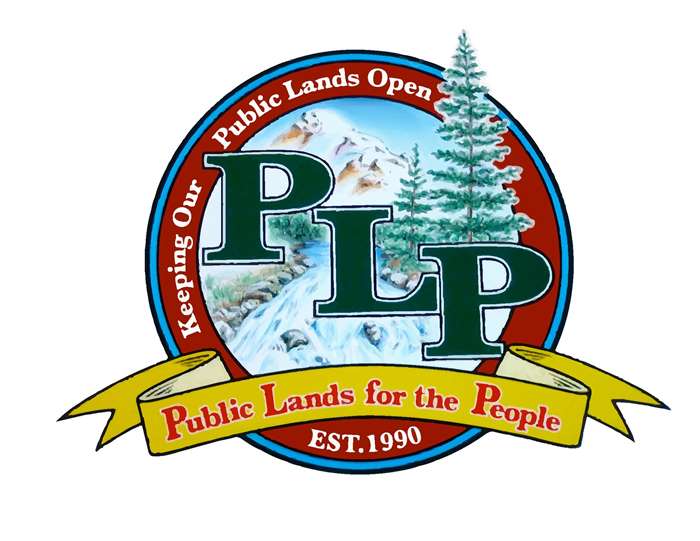 Public Lands for the People’s (PLP) 2022 Fallfest was bigger and better than ever! We had a fantastic group of folks that attended, and at least a couple dozen volunteers who are really the ones who made everything run so smooth!

Where to start? We had many educational seminars on various topics 5 days in a row, including metal detecting class by several experts, drilling and blasting by John Norman, winning legal mining rights battles the PLP way by Clark Pearson (we have many wins in court which back up our guide cards), capturing fine gold from concentrates by Mike Pung (Mr. Gold Cube!), legal requirements for getting your blasting license and more.

There was a very well attended Mining District and Owl Museum tour- wow, the history of the area is fantastic! Dan and Arlene Stanton were our tour guides and they know their stuff! You can book your own tour with them: www.redmtnkellysilver.com

We also had a metal detecting area just for kids and scavenger hunt just for the kids. Not to be outdone, the adult metal detecting hunt was well attended with contestants working hard to find those real nuggets planted in the hunt area. Not in plastic, but bare nuggets for a realistic nugget hunt! Plenty of U.S. and foreign coins were also buried for those who just can’t slow down enough to hear a nugget.

There was pro entertainment again this year around the campfire. We were treated to not one, but TWO nights with the amazing Fiddlin’ Farley of Disneyland fame. Was that a treat or what? Plus, we had Brad Allen back again and more skilled than ever. He was juggling knives, light up LED bowling pins and real FIRE sticks! Oh my, that looked amazing and scary! We counted and he still had all his fingers at the end of the show.

There were daily common digs where folks worked together dry washing which was organized and overseen by Kim Holmes.

The registration table was kept in order daily by our friend Judy Lepper- wow is she ever amazing in her ability to keep us organized! The FALLFEST raffle prizes were on display as well as T-shirts, 2023 Grand Raffle tickets and free Mining Journal magazines for everyone, legal info, etc.

Don Starr organized the First Annual PLP Panning Contest, which was won by Roger and Lori. They received major prizes for their accomplishments, just ask them! We’re holding another Panning Contest next year for sure!

The ladies really enjoyed making crafts on 2 different days thanks to Marcia’s expert guidance. Real coral bracelets made by the ladies were donated for the Saturday night raffle. Speaking of Saturday night - the BBQ and miner’s homemade sourdough was terrific, topped off with a whole bunch of potluck side dishes and a full table of just desserts! A feast for all time!

Regarding PLP’s guide for reclamation dredging, we heard an update on the success PLP members are having with their dredge reclamation efforts in California by Clark Pearson. Clark spelled out the details on how it should be done correctly and also cautioned the group to NOT DO like one member did. They just went and staged their dredge gear by the waterway, ready for dredging after signing up with PLP online; and before they received their instructions on legally reclamation dredging from PLP. They were cited by the Forest Service for their lack of following PLP’s explicit directions. Don’t get in a hurry and make the same mistake. No one who has followed PLP’s directions on proper reclamation dredging has been cited.

Steve Hicks came out from Montana to explain how he and Clark collaborated in helping him win his case against the Forest Service. His win helps all of us assert our mining rights and keep the Forest Service acting only within their regulations. PLP’s forest green card explains how this court case win helps you! Watch for updates on PLP’s guide cards in 2023, our 33rd year fighting to take it back and keep it!

If you were there, you know this review barely scratches the surface of the outing- if you weren’t, you missed the best and most educational mining rights outing ever held. Only to be outdone by the 2023 PLP FALLFEST. Save the date, the first week of October 2023!

Thanks to all who donate and buy tickets! The 2023 Grand Raffle is now underway! Many of you who donated prizes are what makes this work possible; and those who buy tickets we say a big thank you! We are truly thankful for your participation.

If you like this what PLP has accomplished during its first 32 years fighting to keep our Public Lands Rights (of which mining is a huge part), USE IT WISELY and please continue to:

Join/Donate | Public Lands For The People

Supporting PLP’s Grand Raffle also helps us continue to fight for your rights.
A book of 12 tickets is only $10. We have a lot of great high value prizes, and a list of the prizes is at the end of this short newsletter.  You can't win if you don't enter! Tickets are available NOW to purchase by phone for the July 2023 Grand Raffle Drawing. You can call our toll-free number (844)-PLP-1990 which is (844) 757-1990 by July 11th deadline or Mail a Check by the July 1st deadline (to the address below) and specify the number of ticket books you wish to have mailed to you.

Your PLP Board of Directors

The original. No compromise.  Standing 32 years strong for Multiple Use on Public Land "RIGHTS"! 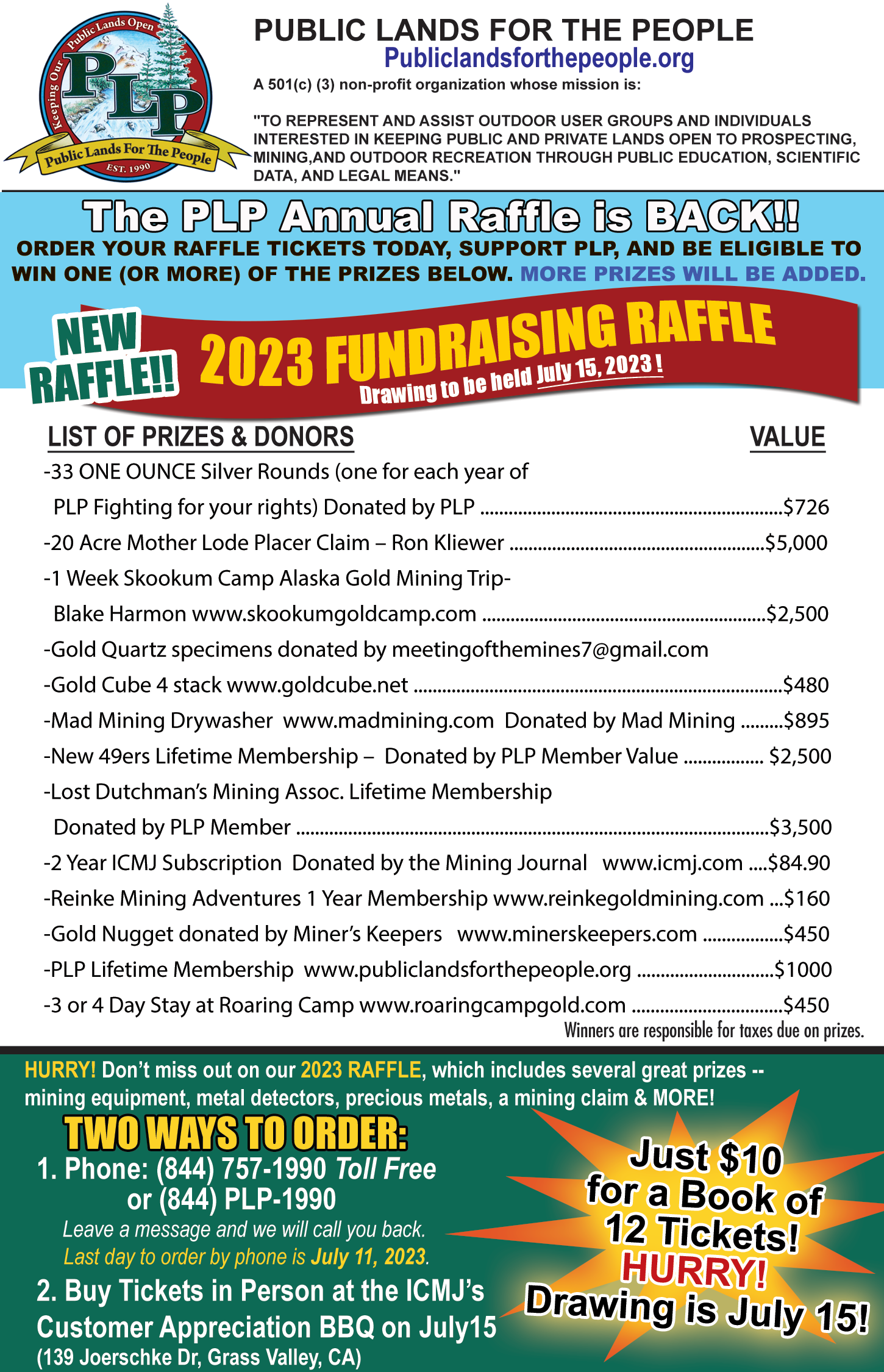