Please Join us for a celebration of an inspired life

Please come as you are, which is exactly how Daniel loved you!! Reception following service. The church is located on a hill with multiple parking lots so dress comfortably.

AMRA will be holding their first Southern California outing January 21, 22, 2017 at Slash X Cafe in Barstow.   This is a chance for all us Southern California Miners to get together and get to know each other, and find some gold at the same time.  So please invite the members of your club or anyone whom might be interested in a fun and dirty weekend in the desert.

Route 66 Gold Miners will open up their 320 acres of claims for dry washing, recirculating systems (bring your own water) and metal detecting on Saturday and Sunday.

Slash X Cafe has offered their property for free camping to us miners from Friday-Sunday. There is a cafe and bar available and they are willing to stay open beyond business hours for us.

They serve breakfast, lunch and dinner so please support them as they are supporting us. We will be holding an event giveaway at 4 pm on Saturday, and tickets will be available for purchase starting Friday night along with AMRA gear. You must check in with us at AMRA’s booth.

I know this is short notice but the outing  and location were confirmed this last weekend.

If you have any questions please reply back and I will do my best to answer questions.

Unity is strength... when there is teamwork and collaboration, wonderful things can be achieved. Mattie Stepanek

Completely ignoring the fact that the Eagle Mountain Mining District (which the FCM has a claim in) is a federally and judicially recognized entity under the Mining Laws, the BLM and Secretary of the Interior proposes to withdraw approximately 22, 462 acers of public land (which includes the Eagle Mountain Mining District) and turn it over to Joshua Tree National Park beginning with a segregation of said lands for 2 years with a notification in the Federal Register on the 18th of November of this year. A public comment period is now open and ends on the 16th of February. A public meeting on the proposed withdrawal will be held on January 18th 2017 from 6:00 PM to 9:00 PM at UC Riverside Palm Desert, 75080 Frank Sinatra Drive, Palm Desert California 92211.

My fellow Miners, Metal Detectorist, Off Roaders, Hunters and all Outdoors People, this is just one more landgrab initiated by environmentalist and supported by the BLM in behalf of the National Park System. There is only one reason for this landgrab and that is to shut you out and take away your rights.

In the “Eagle Mountain Boundary Study Including Possible Land Withdrawal Environmental Assessment” that was published in March of 2016 by the National Park System, says the withdrawal is needed for the protection of cultural and biological resources. This is crap ladies and gentlemen; the area is so remote only the claim holders (who have held claims in the area for nearly 20 years) and very few people venture into the area. Yet the NPS states in the same study, they want to enhance tourism in the area. Is that not an oxymoron? Protection and tourism?

I am requesting each one of you sit down and write a letter of objection to this landgrab. You can go to the following website and make comments: 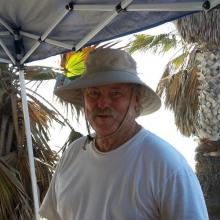 It is with great sadness we share the news of the death of Dan Martin. Dan passed away on November 21, 2016. Our thoughts go out to his wife Linda and his family and friends.

We will miss you Dan.

Potluck dinner. Ham and Turkey provided. Bring your own plates/cutlery and drinks.

Optional participation in secret Santa. Bring a $20 value or more to participate. Bring a gift, get a gift.

This is another small outing. Right now Kevin Regli, Marshall Holman, Jon Kishi, Fred Dahl and myself plan on going. I believe we are all planning on being there Friday until Sunday. If there is anyone interested in attending please let me know so we can look out for you.

The road should be quite good and may even improve on Friday thanks to Marshall's road drag.

Here's the result of the outing, thanks to Marshall